Project development – DNR Fisheries has collected soil samples from the grade to document soil types and screen for contaminants such heavy metals and volatile organic compounds. Soil types were found to be primarily sand, clay, and gravel. The contaminants screening results have yet to be received from the laboratory. The results are necessary to inform DNR regarding potential disposal locations for the soil.

Douglas County and DNR Fisheries have surveyed the stream’s elevations upstream and downstream from the railroad grade to aid in project design.

Canadian Pacific Railway easement – The temporary easement with Canadian Pacific Railway (CP) has gone through a couple of drafts during the summer. It is in decent shape. DNR biologist Paul Piszczek had a call scheduled with CP, which will include a conversation about who will do the work. CP is expecting a contractor, whereas Paul was leaning toward DNR staff. The scope of the easement needed to include soils testing, which is appropriate. Paul discussed a soil testing plan with DNR remediation staff and have an approach that will suit our needs and help guide the decision regarding disposal location.

Paul has a verbal commitment from Stacy Dehne (DATCP engineer) to help with design, since Paul Johnson, our original design partner from NRCS, is retiring.

Two easements signed – WDNR Senior Fisheries Biologist, Paul Piszczek, informs us that he has received signed easements from the 2 landowners adjacent to the grade and is now working on the Canadian Pacific (CP) railroad easement. Project bidding will take place once the CP easement is received.

Project moving along – DNR staff are completing the temporary limited easements with the 2 property owners abutting the rail grade. The Covid-19 issue has been slowing the legal process somewhat. Paul Piszczek and the DNR Real Estate personnel are working diligently on the issue. Brule River Preservation Inc. continues to assist the Town of Brule who are working on the process of obtaining ownership of the grade from the railroad once the 2 landowners have finalized their easements.

Ownership issue being resolved – The Canadian National Railroad has taken ownership responsibility for the grade. Brule River Preservation Inc. (to learn more about Brule River Preservation, click on Brule Preservation) has been doing a great deal of the work during this last month and is working with their lawyers to help the Town of Brule revise the railroad’s purchase agreement and quit claim deed to acquire the grade so that work can begin.

Great news, the money is in the bank! Although the South Shore abandoned rail grade/culvert on Nebagamon Creek is still in place a year later than we’d hoped, we’re getting closer to being able to remove this threat.

Funding Status – The Wisconsin Department of Natural Resources (WDNR) has received the most recent $65,000 grant it requested from the U. S. Fish and Wildlife Service (USFWS). Additionally, pledges and donations have been received from the following:

Together, these non-governmental efforts raised almost $60,000. The WDNR has also committed an additional $45,000 in state trout stamp funds. With the WDNR’s recently awarded USFWS grant, these funds put us one step closer to achieving the goal of removing the South Shore & Atlantic Railroad Culvert/Grade. The success of this fundraising efforts is a testament to how important the Brule is to so many people!

Land ownership Issue – Abandoned railroad lines are some of the most challenging land parcels when it comes to determining land ownership. The Duluth South Shore and Atlantic Railroad (DSS&A) built this rail line in 1882. The rail line crossed 2 streams, Nebagamon Creek and the main stem of the Brule. This rail section was abandoned in 1934. The bridge spanning the Brule (located at the foot of Station Rapids – a short distance upstream of County Highway B) was removed at abandonment, but the grade and culvert at Nebagamon Creek was not. DSS&A merged with other rail lines in the early 1960s. Ownership of this abandoned line has become confounded as the different rail companies merged and/or changed names over the years. This past year, Brule River Preservation funded a land title search to identify the present landowner(s) and also funded a detailed property survey.

The WDNR’s Northern Region staff has been working diligently towards resolving these issues. The grade/culvert removal requires a water regulatory permit needing landowner consent. Temporary permission from 3 landowners is needed before the project can begin. Two of these are adjacent to the abandoned rail grade and the third is the owner of the grade itself. The grade itself is owned by either the Town of Brule or the legacy railroad company – The Canadian Pacific Railway.

The Plan – The WDNR and the Town of Brule are presently looking at a 2-stage approach to the project. First, the grade would be removed down to the height of the culvert. The grade would still be a threat to the Brule River, but at this point a culvert blockage and grade failure would potentially erode much less material into Nebagamon Creek. Permission to do this work would require approval of only the owner of the grade.

Removal of the remainder of the grade and the culvert plus the instream work would be done as the second step once the adjacent landowner permissions were received. Personnel in the United States Department of Agriculture Natural Resources Conservation Service’s Ashland Office are doing the site survey and drawing the instream plan design for WDNR.

From the Air – To view a short drone video of the South Shore Grade site taken in spring of 2018 by Sam Alvar of Seaquest Photography, click on South Shore Video.

Thanks again to everyone! 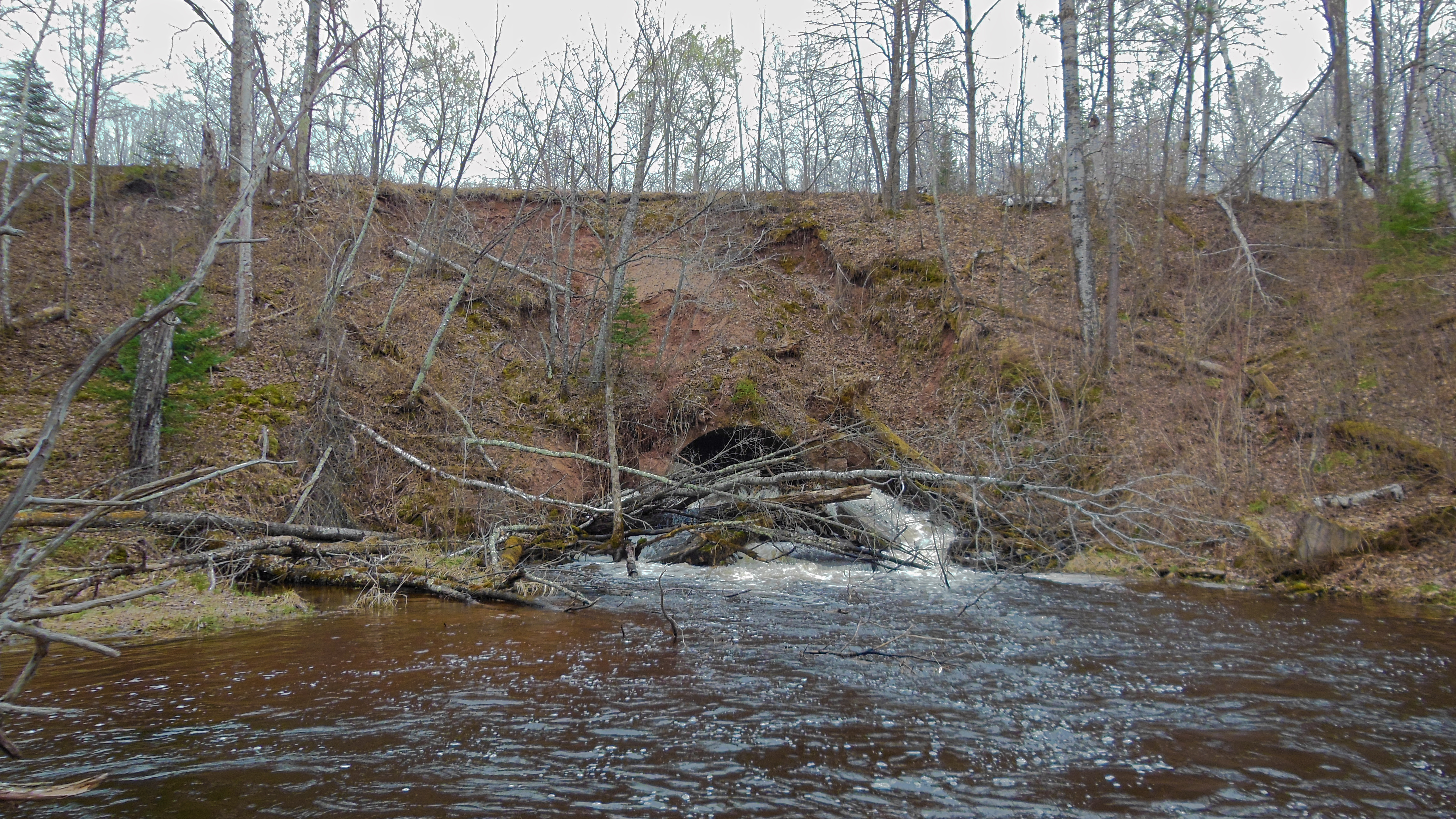